With the support by the National Natural Science Foundation of China, the research team led by Prof. Daoyong Cong and Prof. Yandong Wang at University of Science and Technology Beijing designed a novel metal alloy with a colossal elastocaloric effect promising for energy-efficient and environment-friendly solid-state refrigeration, which was published in Physical Review Letters (2019, 122: 255703).

Refrigeration has become indispensable to our modern society. Foodstuffs, beverages, medicine, electronics and populated spaces all need cooling. Nowadays refrigeration consumes 25 to 30 percent of the global electricity and the demand for cooling is ever increasing under the background of global warming. Present refrigeration relies primarily on vapor compression which uses environmentally harmful fluids and produces greenhouse gases with exacerbating effects on global warming. It becomes imperative to develop alternative cooling technologies that are environment-friendly and highly efficient. Elastocaloric refrigeration based on elastocaloric effect, which refers to the adiabatic temperature change or the isothermal entropy change of the material when a uniaxial stress is applied, has been identified by the U.S. Department of Energy as the most promising non-vapor-compression cooling technology. 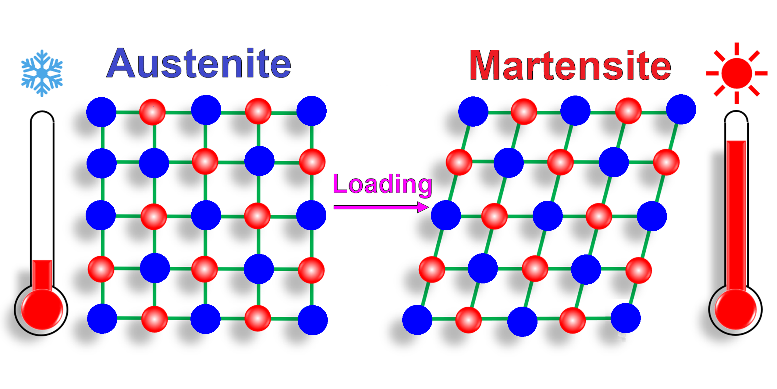 Daoyong Cong and Yandong Wang’s group proposed a novel design strategy to achieve large elastocaloric effect in bulk polycrystalline materials, which involves the requirements that the materials must simultaneously have a large phase transition entropy change and good mechanical properties. Then they employed the design concept that the larger the unit cell volume change across martensitic transformation the higher the transition entropy change, and they introduced a tiny amount of boron to overcome the grain boundary brittleness which had been proved to be quite effective in their earlier work published in Acta Materialia (2017, 127: 33-42) and Materials Research Letters (2019, 7: 137-144). With this design strategy, they developed a novel NiMnTiB alloy that exhibits a colossal elastocaloric effect well exceeding that of the prototype NiTi alloy in any form. They achieved a reversible adiabatic temperature change of elastocaloric effect of 31.5 K, which is the highest value in all (magneto-, electro-, elasto- and baro-) caloric materials in any form (thin film, wire, bulk, etc.). The achievement of such a colossal elastocaloric effect in bulk polycrystalline materials that are easy to produce will push a significant step towards large-scale elastocaloric refrigeration applications. Furthermore, the proposed design strategy may inspire the discovery of giant caloric effects in a broad range of ferroelastic materials.