Our country’s major equipment is rapidly expanding to the harsh natural environment such as the deep sea. The poor corrosion resistance of domestic low-alloy steel is a problem that restricts the "own brand" and its "going out" strategy. Fewer varieties and lack of supporting application technologies have severely reduced the international competitiveness of major equipment and directly threatened national defense and energy security. 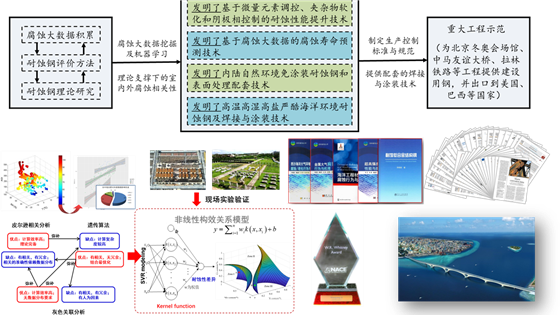 Related research results obtained 2 international invention patents and 51 national invention patents; published 156 SCI papers, which were cited 8404 times by 1,560 institutions in 56 countries/regions; published 5 monographs represented by "Corrosion Resistant Low Alloy Steel"; 7 national standards and 24 industrial standards. The Chinese Society for Corrosion and Protection organized the evaluation of the project's results and believed that "trace element regulation and big data evaluation technology is an international initiative." The project won the highest research award and technical contribution award from the International Association of Corrosion Engineers, and has had a significant international influence. The series of products developed by the project, such as marine corrosion-resistant steel and coating-free bridge steel, have the largest market share in the past ten years, and related achievements have been applied to more than 20 key projects at home and abroad. In the past three years, the accumulated production exceeded 12.27 million tons, the total income was 43.5 billion yuan, and the newly increased profits and taxes were 1.25 billion yuan, which produced significant economic and social benefits. It also laid the foundation for Beijing to become a national corrosion science data center and a high-precision corrosion-resistant new material research and development center.